This week, I’ve decided to take a new approach to this blog. Instead of just sharing my news (which really seems pretty narrow minded), why not share some of the other, cool, art related news that went down this week? So, here are some links that other ‘creatives’ like myself might find interesting.

If you’re keeping up with the Apple ebook litigation drama, Matthew Ingram gives an interesting perspective on how Amazon got its monopoly on ebooks in the first place, which by default makes Apple seem less the criminal master-mind and more an accessory after the fact.  http://gigaom.com/2013/07/10/the-real-villain-in-the-ebooks-case-isnt-apple-or-amazon-its-publishers-addiction-to-drm/

And getting closer to home, the Haynes Gallery has a new exhibit opening next week focusing on, “The Art of Drawing,” featuring works by John Singer Sargent, Normal Rockwell, N.C. Wyeth and others. I know. Is this real?! I’m so there! 🙂 If you’re interested in going the opening reception is Friday July 19, from 6-8 pm. More information can be found at http://gigaom.com/2013/07/10/the-real-villain-in-the-ebooks-case-isnt-apple-or-amazon-its-publishers-addiction-to-drm/

As far as my news goes, I received another commission this week for a very romantic and very sweet gift for a friend. She won’t receive it till her birthday in a few months so it’s all top secret for now. Shhhh!  🙂

Below is the Molly Whuppie project finished for GRU. I also received a final commission to illustrate The Lion and the Mouse which should hopefully be finished next week.

Molly Whuppie, is the story of a brave little girl abandoned in the woods by her parents. She uses her brains to outwit a very bad troll who tries to kill her in her sleep, steals the king’s sword, and chases her across a river. In the end, Molly retrieves the sword and is rewarded with the king’s favorite son in marriage. 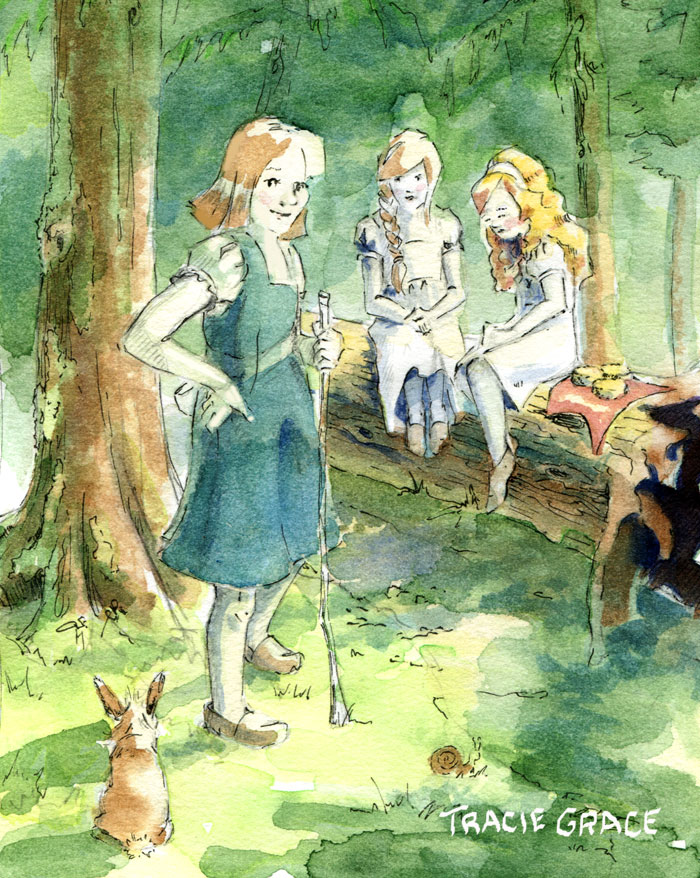 Molly abandoned in the woods with her two beautiful sisters (aside commentary – what kind of parents abandon three of their kids in the woods because – oops! – they’re too poor to feed them all?!?) 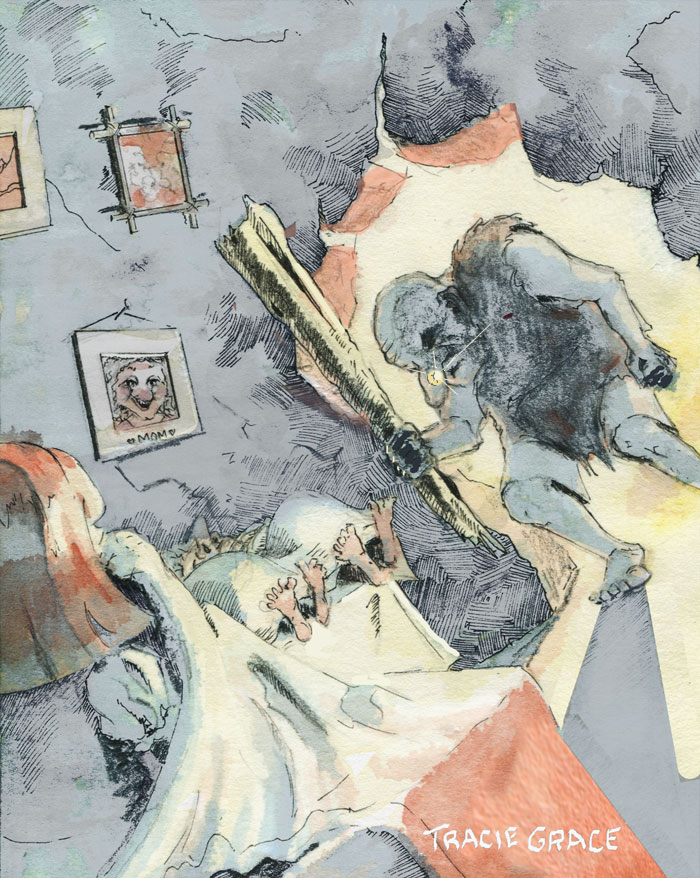 The terrible troll coming to kill the sisters in the troll cave, aka “The Murder at Midnight.” Notice Molly sharing the bed with the troll’s daughters. You can just see their misshapen feet sticking out of the bed sheets. And because GRU wanted the troll’s wife included, there she is hanging in a portrait over the bed. 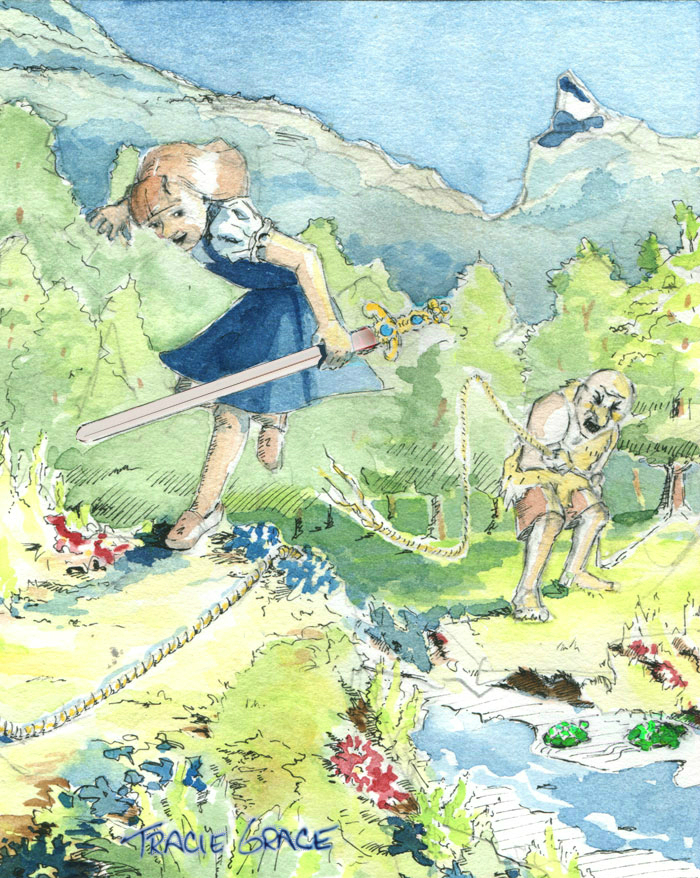 Molly stealing back the king’s sword and jumping over the river to safety. 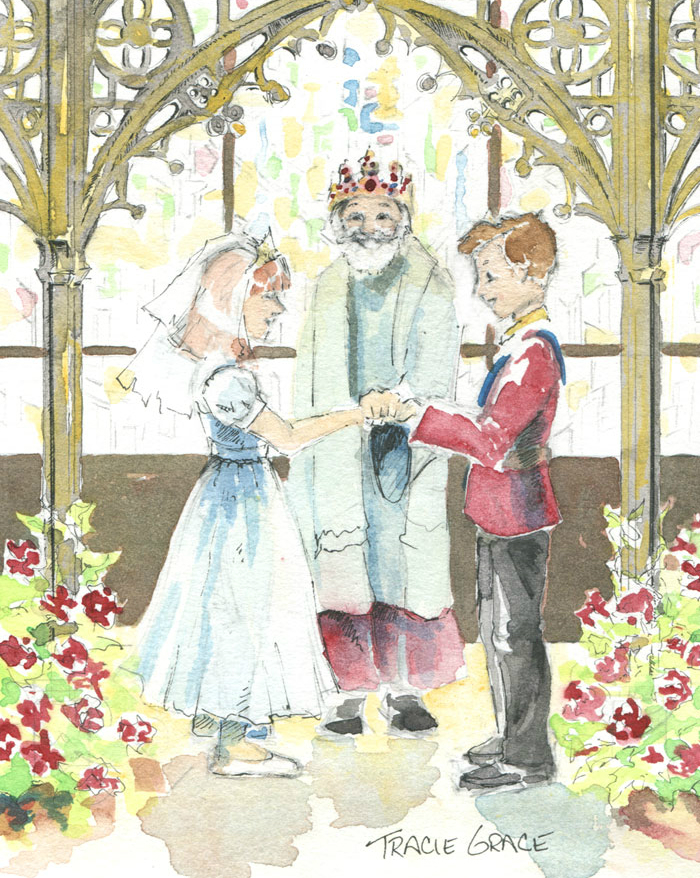 And the final scene where the king rewards Molly by giving her his favorite son in marriage. The End.